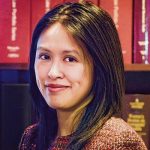 Pauline Yeung-Ha is a Partner in the law firm of Grimaldi & Yeung LLP, concentrating in the practice areas of Trusts, Wills and Estates, Elder Law as well as Special Needs Planning, and is admitted to practice in both New York and New Jersey.

Ms. Yeung-Ha is currently a member of New York State Bar Association’s Elder Law Section Executive Committee, and Vice-Chair of both the Diversity Committee and Membership Services.  She is also a member of the Estate Planning Committee of the Trusts & Estates Law Section. Ms. Yeung-Ha serves on the Board of Trustees of the Brooklyn Bar Association and is a Co-Chair of the Pro Bono & Community Service Committee of AABANY. She serves as Secretary on the Board of CaringKind, a non-profit organization in New York City.  She also serves on the Board of Directors of the National Academy of Elder Law Attorneys, NY Chapter, and a former member of NYSBA’s House of Delegates.