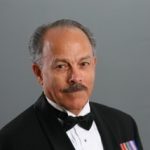 Dr. Gary Solis is a retired Marine with 26 years active duty, twice serving in Vietnam as an armor officer. His J.D. is from the University of California, Davis (Distinguished Graduate), after which he was a Marine judge advocate and court-martial judge for 18 years. His LL.M. (criminal law) is from George Washington Law School, his Ph.D. (law of war) from The London School of Economics & Political Science. He taught law at the LSE for three years, moving to the United States Military Academy in 1996, where he eventually directed West Point’s law of war program for six years. He received the 2006 Apgar Award as the Military Academy’s outstanding professor. He was a 2007-2008 Library of Congress scholar in residence, and currently is an adjunct professor of law at West Point, and Georgetown Law, teaching the law of war. He was on the editorial board of the ICRC’s International Review of the Red Cross (2010-15) and is an elected member of the American Law Institute. His books are Marines and Military Law in Vietnam, Son Thang: An American War Crime, and “The Law of Armed Conflict,” 2d ed. (American Society of International Law 2011 Certificate of Merit). He is a member of the bars of Virginia, Maryland, Pennsylvania, Texas, the District of Columbia, the U.S. Court of Appeals for the Armed Forces, and the Supreme Court of the United States.