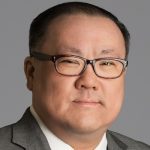 Mr. Kwok received his B.A from Cornell University with a major in Government and minor in Asian American studies. He earned his J.D. from UCLA Law School, where he was an Editor of the Asian American Pacific Islander Law Journal.