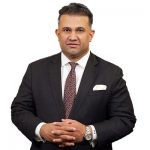 CBS News, Fox News, and HLN regularly call on Vinoo Varghese for legal commentary.  He is both a Martindale AV Preeminent rated attorney and a New York Metro Super Lawyers rated attorney in the white collar criminal defense arena. Earlier in his career, the New York Law Journal recognized him with a Rising Stars award. Varghese’s advocacy has led The New York Times, The Wall Street Journal, the New York Law Journal, and Law360 to quote him multiple times.

In 2000, Varghese began his career as a prosecutor. In 2006, he founded Varghese & Associates, P.C., a criminal defense and white-collar defense firm.

Since then, Varghese and his team have won a complete acquittal for a client in a tax trial against the IRS and DOJ Tax Division. He has tried nearly 40 cases to verdict and has won multiple appeals including before the Second Circuit. Varghese graduated from Brooklyn Law School, New York University, and Chaminade High School. Finally, he is a long-suffering Mets fan.