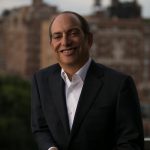 Michael D. Fricklas is Chief Legal Officer of Advance Publications, Inc., the top legal position at Advance.  In that role, Mr. Fricklas is responsible for all the legal matters and government relations at Advance, a diverse privately-held company that operates and invests in a broad range of media, communications and technology businesses globally. Advance is engaged in a significant capital deployment program and operates businesses in over a dozen countries that include Condé Nast, a premium media company with a global magazine and digital brand portfolio including titles such as Vogue, Vanity Fair, GQ, The New Yorker, and Wired.

Until April 2017, Michael D. Fricklas was one of the top executives at Viacom, reporting to Viacom’s CEO and COO. He served as Executive Vice President, General Counsel and Secretary, Viacom’s most senior legal position, beginning in 1998. He joined Viacom in 1993 as Deputy General Counsel.

He is a frequent panelist and lecturer on corporate governance, cybersecurity and the law and business of entertainment.

Mr. Fricklas was past president of the Association of General Counsel and has served in a variety of other professional and community activities, including as Secretary and a member of the Board of Jazz at Lincoln Center, as a member of the Board of Overseers of Boston University and as a member of the Board of Visitors of Boston University School of Law. He was named one of “America’s 50 Outstanding General Counsel” by the National Law Journal in 2016, and the Viacom Law Department was named as “Best Legal Department 2016” by Corporate Counsel Magazine. Mr. Fricklas has received numerous awards including being the recipient of the Raising the Bar Award from The Hollywood Reporter, the Counsel of the Year Award from the Association of Media and Entertainment Counsel, the Legal 500 2014 Entertainment Individual of the Year, and the top honor for general counsel, the “Excellence in Corporate Practice” award, from the Association of Corporate Counsel. He also serves as a member of New York’s Permanent Commission on Access to Justice.