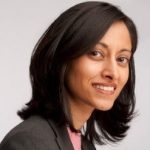 Manisha M. Sheth serves as the Executive Deputy Attorney General for Economic Justice for the State of New York. She leads five litigation bureaus, including Investor Protection, Antitrust, Internet and Technology, Consumer Frauds, and Real Estate Finance. Prior to joining the Attorney General’s office, Ms. Sheth was a partner at the law firm of Quinn Emanuel Urquhart & Sullivan, LLP where she focused on a wide range of complex commercial litigation, including securities litigation, structured finance and derivatives litigation, healthcare litigation, and government investigations and white collar. Previously, she served for five years as an Assistant U.S. Attorney in the Criminal Division of the U.S. Attorney’s Office for the Eastern District of Pennsylvania, and was based in the Philadelphia office. In that position, she secured indictments in more than 35 cases and brought eleven cases to trial. She prosecuted a wide range of misconduct, including health care fraud, financial institution fraud, money laundering, tax fraud, and regulatory crimes. A graduate of the University of Pennsylvania and the Georgetown University Law Center, Ms. Sheth was a law clerk for the Hon. William H. Pauley III in the U.S. District Court for the Southern District of New York. Ms. Sheth was named to Crain’s New York Business “40 Under 40” list in 2013, and to The National Law Journal’s “Minority 40 Under 40” list in 2011.