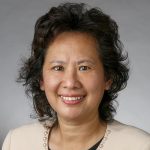 Judy has extensive experience in the financial services industry in a variety of roles at HSBC and Chase including First Vice-President of the Metro NY Personal Financial Services Learning & Development Team, Premier Segment Leader, and District Sales Leader for the Queens and Bronx Districts. She has also held positions as an Administrative Officer and Financial Advisor. During her career, Judy has distinguished herself and received numerous recognition awards by consistently producing results above goal. She is passionate about delivering an exceptional experience to her customers while successfully developing and mentoring her team.

Judy is actively involved in community and charitable organizations including as a board member of Queens Botanical Garden, the Treasurer of Queens Chamber of Commerce Foundation, and Vice President of Jiangmen Wuyi Youth Association of Eastern USA. She graduated at Hong Kong Polytechnic and immigrated to the States in April 1989. Judy is dedicated to helping new Asian immigrants assimilate into the United States, and is fluent in English, Cantonese, and Mandarin.

Diversity and Inclusion and What it Means to be Multicultural