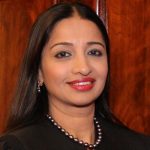 Judge Rajeswari made history when she was sworn in by Mayor Bill de Blasio in April of 2015 as the first South Asian woman and the first Indian-American woman to be appointed to Criminal Court in the history of New York. She was born in Chennai in Southern India and migrated to the United States at the age of sixteen and is a renowned Indian classical dancer and instructor. Judge Rajeswari was awarded the Belle Zeller Merit Scholarship and graduated summa cum laude from the College of Staten Island, with a Bachelor of Science degree in 1994. She graduated with honors from Brooklyn Law School with a law degree in 1998. She began her career at the Richmond County District Attorney’s Office in 1998 where she served for over sixteen years in various bureaus. She was promoted to the position of Deputy Bureau Chief of the Sex Crimes Special Victims Bureau and Senior Trial Counsel for the Supreme Court Bureau. She wants to improve access to justice in the court system for immigrants and provide more access to services for women and children who are victims of domestic violence and sexual abuse. Judge Rajeswari is honored to serve as the co-chair on the Advisory Committee on Court Interpreting for the Office of Court Administration. She understands the special challenges faced by individuals with limited English proficiency and wants to provide a better court environment for thousands of immigrants who participate in our judicial system regardless of the language they speak.