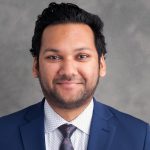 Amol Sinha is the Executive Director of the ACLU-NJ, having taken the helm in 2017. He brings to the ACLU-NJ a vision to make the organization a more collaborative, accessible resource for all of New Jersey, and he strives to create an even better, even more welcoming Garden State.

Prior to joining the ACLU-NJ, Amol was a policy advocate at the Innocence Project, where he led state-level policy campaigns nationwide to address wrongful convictions. From 2010-2015, Amol was the director of the Suffolk County Chapter of the New York Civil Liberties Union, where he led efforts to defend and promote the constitutional rights of all Suffolk County residents, particularly around policing and criminal justice, immigrants’ rights, and education reform. At the NYCLU, Amol worked on legislation, litigation, and community-based advocacy, and gained a deep understanding of the need to work collaboratively with community members, advocates, and government officials in order to advance policy.

Amol holds a B.A. in journalism and economics from New York University, and a law degree from the Benjamin N. Cardozo School of Law where he was a Public Service Scholar. Most importantly, Amol grew up in Lawrenceville, NJ, and is a proud product of Lawrence Township Public Schools. His role at the ACLU-NJ merges two central passions: advocating for constitutional rights and New Jersey.

Activism Through Advocacy: How Lawyers Can Fight For the Public Good